Google is dabbling with real time search? May be.

Looking for a specific time frame result set has probably been one of the most ambitious tasks that Google users ever attempted.And that's the reason why internet users continue to spend more and more of their online time using social networks. They are interested in friend, partner … more in general relationship with which share everything, especially fresh and real time results.

How good are search engines in offering fresh and real time results?

My opinion is that they aren't able at all, at least until some months ago when Google (at least) introduced the search options.Everything was looking fine, but you know the power of Internet is the capacity to offer us everyday something new and web user rarely are satisfied.

That's the reason why recently Google has expanded the time-power research. Most of us probably won't use this trick, and I believe it has always been there since search option has been introduced, but the greatest part of web user seems never felt the necessity to test it until some days ago.

What is the trick?

Hacking a bit the query string proposed by the standard Search Options it would be possible filter out results not only for the past 24 hours or for Recent Results, but also for the "past X minutes" or "X seconds".

This can be done by changing a parameter called QDR - Query Date Range - in the URL (it's showed as tbs=qdr:x) adding an X timeframe factor according to a specific format.

For example, to limit a search to the last ten minutes all you need to do is change the default value proposed for "The past 24 hours" - that appear as "d" - to a "n" and you'll be limited to results from the last minute. Simply adding a numeric value behind that, and you can increase the time frame: set it to "n5" and you'll see results indexed in the last 5 minutes, or, if you are interested into seconds time frame simply use "s30".

Time frames options currently work only on English version of Google, so Google.com and Google.co.uk, but they will introduce this great feature in the other version in a very short time.
If you try it in a localized version of Google, you will get the below message.

Why time frame result set is so interesting?

To be honest they aren't. It mostly depends by you and if you really enjoy stay tuned up to a specific topic, or if you are particular interested to the last key fact that has happened (just because you are working on something particular).

That's because – most probably – the search options are hidden by default, because the greatest part of web user don't take care about what's happened in a day or in minute, they just want to read something.

Suppose you are interested on the latest Berlusconi (flim-flam) news, this search query will display search results for him in the last 30 minutes. 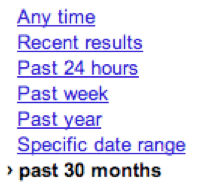 The most interesting thing to look at is the hacked query string shows you the expanded search option menu with the exact time frame you asked. This particular param, combined with sbd:1 (Order by time frame) would be a great companion for gossip makers.

The results returned by the query are interesting but at the same time not so much relevant as much as the results proposed by social media channel like Twitter.

I strongly believe that Google should increase its effort on this real time search aspect making more prominent the search algorithm when used in this way. This probably will increase the number of users are more likely to use such a service to check for the latest chatter and opinions from around the web on a specific topic.